The Meat Substitutes Market in Japan

In recent years, a “diet without meat” has become a worldwide trend. While the demand for animal protein has increased due to the rise of global populations, the interest in health and environmental issues has subsequently grown. The quality improvements in meat substitutes, such as taste and texture, have also contributed to the trend.
Around 2015, major food manufacturers and restaurant chains in Japan started to sell hamburgers made with soy materials. Since then, meat substitutes have become increasingly available to general consumers.

Nevertheless, many new products as seen below are a few examples of many that have been recently introduced and sold in supermarkets and convenience stores in Japan.

1. Yakiniku (sautéed beef flavored with Korean-style sauce), and tofu bar made of tofu, edamame, and hijiki (a type of seaweed).
2. Soy meat in Thai’s popular green curry.
3. Chicken nuggets made of soy meat.
4. Shredded cheese made of soy milk that can be used for pizza or pasta dishes.

Noteworthy to mention, plant-based foods were not readily available for vegetarians or vegans till about a few years ago. With that, the next time you come to Japan, you will probably be able to see more selections of tasty plant-based foods including meat substitutes that would be unique to the country’s food culture.

Recently, and for the first time, I served a soy meat hamburger lunch that is seen in the below picture to the Japanese rugby team whom I support. I had the chance to explain the benefits of soy meat, such as being low in calories and fat, a good source of dietary fiber, containing an almost equal amount of protein as meat, and that its consumption instead of meat contributes to reducing the environmental load. Although it is obvious that most athletes prefer real meat, nearly 90% of the team members answered in a questionnaire that they will eat soy meat hamburgers when served again in the future. 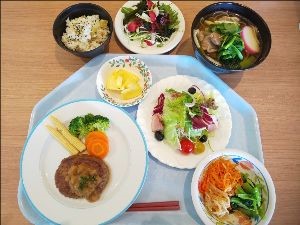 It is uncertain whether rugby players, whose energy needs are twice as much as regular people, need to reduce their meat consumption. However, it may be a good opportunity for them to take into consideration the global environmental problems and act upon them with the substitution of meat with meat substitutes as a starting point.

Reiko Hashimoto is the managing director of Food Connection Inc., established in 2000 as a consulting firm specializing in sports, nutrition, and health. Food Connections is a pioneer in the field of sports nutrition, as it provided nutritional advice to top athletes in professional soccer clubs, national rugby teams, and Olympians in Japan. In 2019 when the Rugby World Cup was held in Japan, Food Connection took on a contract with the organization committee and worked as an advisor and communicator for all sixty team hotels nationwide and twenty participating teams worldwide, with the aim to serve the best possible food for all athletes during the event.